In the 17th chapter of Acts, the author, Luke, tells us about Paul’s experience in Athens, Greece. As he wandered around the city, he was stupefied to find so many idols to a variety of Gods. It was said about Athens, ‘it had more Gods than men’. Paul engaged with the various philosophers, Epicureans, Stoics, and others curious about Paul’s teaching. He was asked to come to the Areopagus which was the centerpiece of religious and philosophical discussions. As Luke tells us in verse 22ff of Acts 17, “Paul then stood up in the meeting of the Areopagus and said: People of Athens! I see that in every way you are very religious. 23 For as I walked around and looked carefully at your objects of worship, I even found an altar with this inscription: to an unknown god. So, you are ignorant of the very thing you worship—and this is what I am going to proclaim to you.24 “The God who made the world and everything in it is the Lord of heaven and earth and does not live in temples built by human hands. 25 And he is not served by human hands, as if he needed anything. Rather, he himself gives everyone life and breath and everything else. 26 From one man he made all the nations, that they should inhabit the whole earth; and he marked out their appointed times in history and the boundaries of their lands. 27 God did this so that they would seek him and perhaps reach out for him and find him, though he is not far from any one of us. 28 ‘For in him we live and move and have our being.’As some of your own poets have said, ‘We are his offspring.” 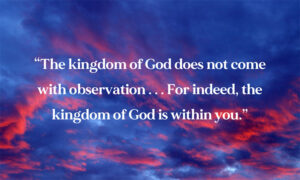 The essence of Paul’s teaching here is emphasized in I Corinthians 3:16 Do you not know that you are the temple of God and that the Spirit of God dwells in you? (NKJV) Paul is telling the Athenians that this unknown God is the very self of God made known in the core of our being. This creator God lives within us. This God is not out there in your idols but lives in the heart and soul of every human being.

Jesus had a hard time getting his Disciples to understand the notion that God was not out there, up there or manifest in any one idol. His teachings always inferred  that God was within the soul of every person. It is interesting to me that Paul understood this teaching. The I Corinthians reference from above acknowledges God’s Spirit within. This Corinthian writing took place sometime in the early fifties (53-54ce), which proceeds even the earliest gospel writing of Mark in the early 70’s, after the Roman destruction of the temple in Jerusalem. An exception might be the Gospel of Thomas which could have been written as early as 60ce, though some scholars say Thomas could be as late as 140ce. Thomas’s gospel certainly indulges the notion of the ‘God within’.

It is believed that Jesus and Paul were contemporaries of each other though there is no indication that they had ever met or knew one another. Paul was possibly born around 3bce, the same time as Jesus. Jesus died around 33ce which was most likely around the time that Paul had his Damascus experience. Was it before or after Jesus’ crucifixion? Impossible to say but I would argue that it was after Jesus’ crucifixion. Prior to the Damascus event, Paul was a proud Pharisee and righteous supporter of Judaism against the new movement referred to as The Way. Tradition indicates that Paul was executed around 64ce during the reign of Nero, following the great fire in Rome around 64ce. Nero blamed the fire on the Christians and began an execution regiment that purposed to dispose of all the Christians, believers of The Way. Paul’s execution was most likely the result of Nero’s wrath.

The above text from Luke 17 was written between 80 and 90ce, which was the same time as the the book of Acts. This would make sense since they seem to share the same authorship. We can’t discount the oral tradition that lived out in the various faith communities. Both texts in Acts and Luke follow fifty plus years after the crucifixion of Jesus and twenty plus years after the death of Paul. I find it fascinating that the author of Luke and Acts understood the teaching of Jesus that God is not out there, but ‘within’.

There is a similar text in Matthew which was written between 80 and 90ce. In the 5th chapter, 17th verse, Jesus claims he came not to destroy the law but to fulfill it. In essence, I believe this text, that he came to fulfill the law and not destroy it, means that he came to tell people about the ‘unknown God’ or the God that the law could not explain. This, of course, is the God that lives within.

So, are you looking for the unknown God? Are you trying to find God in books? In relationships? In nature? In the church, synagogue or temple? In the great teachers? In Buddha, Christ, Mohammed, Krishna, Bahaullah? God makes him/herself known through all of these entities, and most importantly, through you. So shine brightly that others can see your light and make the unknown, known.