Pulling People In, Or Pushing Them Out?

From Father Richard Rohr, Center for Action and Contemplation, March 21, 2022:

“The disciples aren’t sent out to create an institution fortified by uniformity, just another tribe highly defended against all outside forces. Certainly, Western Christianity goofed some things up: it fostered separateness; it bet all its money on the “sin” horse; and it relied so heavily on external religious exercises. Clearly, we are being propelled into the world to cultivate a movement whose ventilating force is an extravagant tenderness. The disciples didn’t leave Jesus’ side with a fully memorized set of beliefs. Rather, theirs was a loving way of life that had become the air they breathed, anchored in contemplation, and fully dedicated to kinship as its goal. [2]”

“The gospel always wants to dislodge itself from the places where it gets stuck and embedded in the narrow, cultural structure. So, we all take steps to free it, find our way, again and again, to an expansive tolerance and a high reverence for paradox. We need to allow the Church to become a movement again. Jesus says if you’re not gathering, you’re scattering [see Matthew 12:30]. We either pull people in or push people out. We attract in the same way Jesus did.”

What do these two narratives have in common? At the outset, one would think it was about how the institutional church bet its money on the “sin” horse along with the fact that the church has gotten stuck in the “narrow, cultural structure.”  Even though that be so, the central message, I believe, is that “we either pull people in or push people out” and have lost the true dimension of Love and Compassion.

Betting on the “sin” horse has anchored the faith in an attitude of negativity.

The Thou Shalt NOT’S of the Old Testament commandments, (excluding the laws of Leviticus and Deuteronomy); You’ve heard it said thou shall not….But I tell you a new understanding… (Matthew 5:17ff)

If you want to bring people IN, you can’t push them out with a lot of negativities. The church has done a very good job of keeping people out of their communities with exclusive labels from dress code to gender roles. Is it any wonder that only 47% of Americans currently belong to a church, down 70% from 1999. 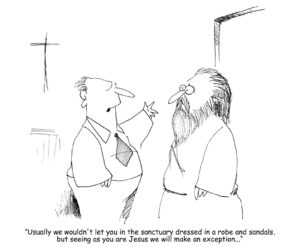 In the early part of the late 19th and early 20th century, churches, particularly the Evangelicals, were calling for a revival of faith. Science and technology were driving a wedge in people’s need for a faith connection. Unfortunately, their idea of a revival was to return to a first century belief, getting back to the “dogmatic fundamentals” of the Christian faith ignoring the cultural expansion of ideas and technologies that were a part of the new age in the 20th century.

I don’t have a problem with the idea of revival. Retired Bishop John Shelby Spong has claimed unless Christianity is willing to come of age in the 21st century, it will die off. So, what kind of a revival are we talking about?

I can say with certainty that it is not getting back the theology of the first and second century. Theology, which often turns into dogma, is never the answer. Rather, it’s getting back to the basic teachings of master Jesus which are summed up in, “Love your neighbor as yourself, and do unto others as you would have them do unto you.” In essence, it is a replay of the prophet Micah, chapter 6, verse 8, “What does the Lord require of you but to serve justice, love mercy and walk humbly with your God?”

There is nothing in Jesus’ teachings that says who is worthy and who is not. Jesus emphasized the notion that ALL of God’s creation, yes, ALL people, NO EXCEPTIONS, no exclusions, ALL are worthy of God’s love and grace. That means that all the likes of the Donald Trumps, Joe Bidens, Vladimir Putins, and even you and me are worthy of grace.

I know that the 25th chapter of Matthew talks about the sheep and the goats. Sheep are worthy, goats are not. I don’t believe Jesus would exempt anyone from grace.  If truth be told, I would much rather be a goat. Goats are self-motivated, spontaneous, and live in the moment. Sheep are simply followers and need a leader. Goats are leaders. Frankly, I don’t believe that particular scripture is part of Jesus’s teaching but an editorial from the author, Matthew, or whoever wrote the book. By the time Matthew was written, probably in the 80’s AD, dogma was already laying a fundamental foundation in the early church. Thank you, Paul.

From the musical and soulful mind of John Lennon, “Imagine” if you would, what would a church community look like without its dogma? No exclusions.  I remember when I was in Seminary in the 60’s, there was a church in San Francisco called Glide Memorial Church which practiced being an inclusive community, and they are still at it today. As their information page on their website says,

“GLIDE is a nationally recognized center for social justice, dedicated to fighting systemic injustices, creating pathways out of poverty and crisis, and transforming lives. Through our integrated comprehensive services, advocacy initiatives, and inclusive community, we empower individuals, families, and children to achieve stability and thrive.

GLIDE is on the forefront of addressing some of society’s most pressing issues, including poverty, housing and homelessness, and racial and social justice.

GLIDE’s mission is to create a radically inclusive, just, and loving community mobilized to alleviate suffering and break the cycles of poverty and marginalization.”

Based on the radical teachings of Jesus, doesn’t this sound like what the Good News should be about? Now I know some of you will say, “there is nothing in there about saving the souls of those lost people.” Show me in the Gospels, where Jesus, before he healed anyone, said, “You poor lost soul, before I heal you, let’s get your soul ‘saved’ so your healing will mean something.” Jesus is concerned about the “whole” person, knowing that his healing was complete healing.  Justice, mercy, and compassion are the primary force behind inclusion. I would say, not a judgment but an observation, that any church that tries to substitute dogma for inclusion of peace, justice and mercy has sold their soul to you know who.

I would support a revival that believes and works at inclusion of peace, justice and mercy and provides the action to support those words which leads me to say, are you pulling people in or pushing them out?